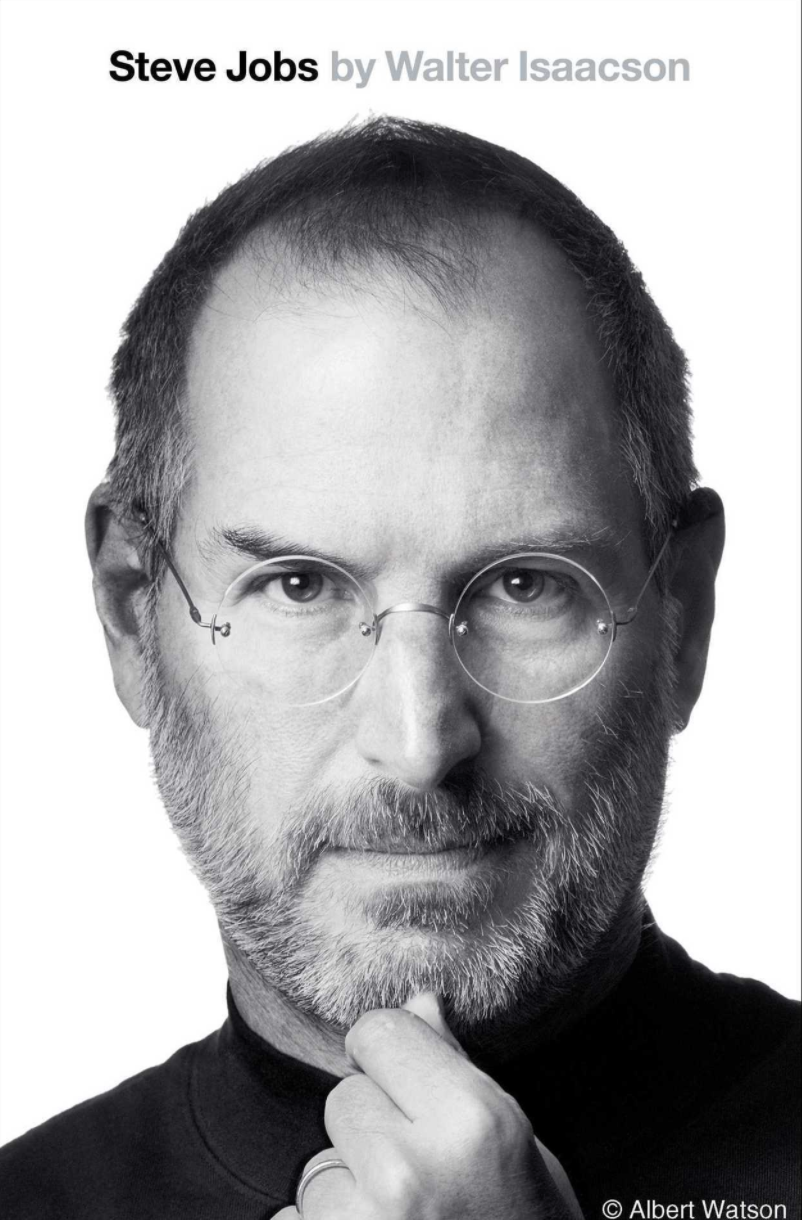 Follows Jobs' life in chronological order, from his early childhood to death.

Art vs. Science: Fusing the two to reach business success.

"He knew that the best way to create value in the twenty-first century was to connect creativity with  technology."

"At a time when the United States is seeking ways to sustain its innovative edge, and when societies around  the world are trying to build creative digital-age economies, Jobs stands as the ultimate icon of inventiveness, imagination, and sustained innovation."

“I always thought of myself as a humanities person as a kid, but I liked electronics, then I read something that one of my heroes, Edwin Land of Polaroid, said about the importance of people who could stand at the intersection of humanities and sciences, and I decided that’s what I wanted to do.”

"This fusion of flower power and processor power, enlightenment and technology, was embodied by Steve  Jobs as he meditated in the mornings, audited physics classes at Stanford, worked nights at Atari, and dreamed of starting his own business."

“Picasso had a saying — "Good artists copy, great artists steal" — and we have always been shameless about stealing great ideas.”

Bill Gates, to Jobs [about Microsoft using the GUI for windows, like Jobs had done from Xerox], “Well, Steve, I think there’s more than one way of looking at it. I think it’s more like we both had this rich neighbor named Xerox and I broke into his house to steal the TV set and found out that you had already stolen it.”

"The mark of an innovative company is not only that it comes up with new ideas first, but also that it knows  how to leapfrog when it finds itself behind."

"He knew, however, that the best way to stop piracy — in fact the only way — was to offer an alternative that  was more attractive than the brain-dead services that music companies were concocting. “We believe that 80% of  the people stealing stuff don’t want to be, there’s just no legal alternative.""

Confidence and a crazy mindset for early success (Millionaire @ 23)

"I was very lucky, because when I was a kid both my dad and the Heathkits made me believe I could build anything.”

"Pretend to be completely in control and people will assume that you are."

"The people who are crazy enough to think they can change the world are the ones who do."

"Western rational thought is not an innate human characteristic; it is learned and is the great achievement of Western civilization. In the villages of India, they never learned it. They learned something else, which is in some ways just as valuable but in other ways is not. That’s the power of intuition and experiential wisdom."

The paradox of Jobs' spiritual side vs. his commercial instincts: "In the end, Jobs’ pride in the objects he made overcame his sensibility that people should eschew being  attached to such possessions."

"Jangling inside him were the contradictions of a counterculture rebel turned business entrepreneur, someone  who wanted to believe that he had turned on and tuned in without having sold out and cashed in."

On the plot for Toy Story: "It sprang from a belief, which he and Jobs shared, that products have an essence to them, a purpose for which they were made. If the object were to have feelings, these would be based on its desire to fulfill its essence.  The purpose of a glass, for example, is to hold water; if it had feelings, it would be happy when full and sad when empty."

"He had neither Ellison’s conspicuous consumption needs nor Gates’ philanthropic impulses nor the competitive urge to see how high on the Forbes list he could get. Instead, his ego needs and personal drives led him to  seek fulfillment by creating a legacy that would awe people. A dual legacy, actually building innovative products and building a lasting company."

Is this a good thing or a bad thing? It goes against stoic realism. It's almost like faking it until you make it.

“If you trust him, you can do things.” Holmes said. “If he’s decided that something should happen, then he’s just going to make it happen.”

"Pretend to be completely in control and people will assume that you are."

Technology and its Influence on Society

Incredible foresight from the Whole Earth Catalog (computing magazine, 1968): "We are as Gods and might as well get good at it... A realm of intimate, personal power is developing — the power of the individual to conduct his own education, find his own inspiration, shape his own environment, and share his adventure with whoever is interested."

"The people who invented the twenty-first century were pot-smoking, sandal-wearing hippies from the West Coast like Steve, because they saw differently."

Brand image campaign vs. product campaign: "It was designed to celebrate not what the computers could do, but what creative people could do with the computers."

Both the 1984 campaign, and the later one (can't remember the product), associating famous faces with Apple.

He was deliberately hurtful. Unnecessary.

It seemed like he really needed to grow up and hit some hard knocks before he could really sustain success.

Unlike Sam Walton's story, Sam seemed to have carried the same values, motivations, and strategies onwards for 60 years. Although it could be the difference between an autobiography (told from one perspective at the end) vs. biography (coming from an unbiased 3rd perspective).

Jobs was stubborn, and not pragmatic. Ultimately, it may have killed him. Refusing to take advice and do chemo straight up may have allowed the cancer to spread and eventually kill him.

On failing at NeXT: "At the company he founded after being ousted from Apple, Jobs was able to indulge all of his instincts, both good and bad. He was unbound. The result was a series of spectacular products that were dazzling market  flops. This was the true learning experience. What prepared him for the great success he would have in Act III was  not his ouster from his Act I at Apple but his brilliant failures in Act II."

After returning to Apple, Jobs gained ground by cutting distractions, selling less products — but doing it better. "We’re trying to get back to the basics of great products, great marketing, and great distribution. Apple has drifted away from doing the basics really well.”

He finally began asking simple questions, like, “Which ones do I tell my friends to buy?” When he couldn’t get simple answers, he began slashing away at models and products. Soon  he had cut 70% of them.

“Stop!” he shouted at one big product strategy session. “This is crazy.” He drew a horizontal and vertical line to make a four-squared chart. “Here’s what we need,” he continued. Atop the two columns he wrote “Consumer” and “Pro”; he labeled the two rows “Desktop” and “Portable.” Their job, he said, was to make four great products, one for each quadrant.

“You’re blowing it with Fox News,” Jobs told him over dinner. “The axis today is not liberal and conservative, the axis is constructive-destructive, and you’ve cast your lot with the destructive people.

Handling the "antenna-gate" issue. He captured it in four short, declarative sentences: "We’re not perfect. Phones are not perfect. We all know that. But we want to make our users happy."

His 20 year anniversary: "...You swept me off my feet. It was snowing when we got married at the Ahwahnee. Years passed, kids came, good times, hard times, but never bad times. Our love and respect has endured and grown. We’ve been through so much  together and here we are right back where we started 20 years ago — older, wiser — with wrinkles on our faces and  hearts. We now know many of life’s joys, sufferings, secrets and wonders and we’re still here together. My feet have never returned to the ground."

YOUR SUBSCRIPTION WAS SUCCESSFUL
Oops! Something went wrong while submitting the form.